The intricate web of interactions between hummingbirds and their food plants evolved over millennia as a result of diffuse co-evolution which has resulted in a remarkable array of morphological forms and functions. On-going human activities, such as deforestation and climate change, threaten these interaction webs, yet little is known as to how hummingbirds and their food plants will respond. This limitation derives from the fact that interactions are influenced by processes acting a across a range of spatial and temporal scales — from local interactions occurring in a specific time and place to the evolution of life forms across millennia.

We are studying hummingbird-plant interactions across elevational gradients in three distinct biogeographic regions, the Talamanca Mountain Range (Costa Rica), the Andes Mountains (Ecuador) and the Atlantic Forest (Brazil).  By combining extensive sampling, new conceptual approaches and rigorous statistical methods across these three regions with distinct evolutionary histories we are bridging the gap between local interactions and evolutionary and biogeographic processes. 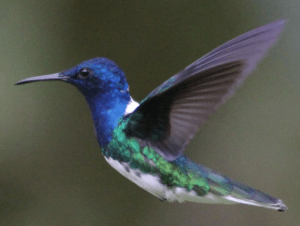 The project is led by Prof. Dr. Catherine Graham, from the Swiss Federal Research Institute, WSL in collaboration with Ms. Tatiana Santander from Aves y Conservacion in Ecuador, Prof. Dr. Isabela Galarda Varassin from Federal University of Paraná in Brazil and Prof. Dr. Maria Alejandra Maglianesi of the Universidad Estatal a Distancia, Costa Rica and Dr. Ben Weinstein from the University of Florida, Gainesville.  In addition, our team includes local land-owners, technicians, undergraduate students and non-governmental organizations as well as Swiss and Brazil based masters and PhD students, post-doctoral scholars/research scientists and a network of international collaborators totaling ~ 40 people.

The main data collection is funded by Horizon 2020 research and innovation program (grant agreement No 787638) with additional support for Ecuador from the Swiss National Science Foundation (No. 173342). Preliminary funding was provided by National Geographic (grant agreement 9952-16)