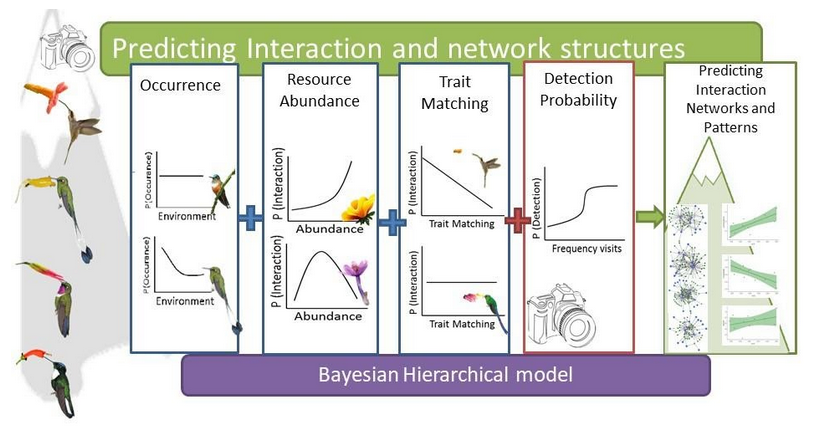 Posted at 17:25h in Project Results by ephiadmin 0 Comments
0 Likes

One of the important goals of network ecology is to discover the mechanisms determining interaction strength and fidelity between interacting species (Bascompte and Jordano 2007). When species co-occur in time and space, their probability of interacting is influenced by the gain from partner rewards resulting from the interaction versus the cost of searching for and interacting with partners (Spiesman and Gratton 2016). Gains may depend on complementary traits of interacting partners which confer efficient handling time during resource extraction in the case of hummingbirds, or greater con-specific pollen deposition for plants (Vázquez et al. 2009, Bartomeus et al. 2016). Alternatively, species may reduce search time by interacting with the most abundant partners, regardless of their traits, either due to increased encounter rates or stronger search images for common resources (Abrams 2010, Fagan et al. 2013). Knowledge about the trade-off between benefits and costs associated with interactions will help us to understand why some species are specialists while others are flexible, using an array of resources, and how such species-level characteristics influence the stability of the ecological interaction networks.

We are developing a hierarchical Bayesian N-mixture model to predict the probability of an interaction. The model accounts for both errors in the detection of the interaction and ecological factors, such as abundance or trait-matching, where partners with well-adapted morphologies gain a fitness advantage, and abundance. When we do not record an interaction between two species in the field is it unclear whether the sampling simply failed to detect the interaction, or if the interaction truly did not occur. The danger of not considering detection is conflating non-detections and true absences and, as a result, erroneously inferring some ecological mechanism (Weinstein and Graham 2017). For example, mistakenly classifying an interaction as impossible due to morphological, temporal, or spatial constraints (so-called ‘forbidden links’ Vázquez et al. 2009), when in reality we simply did not observe the interaction during our sampling.

Our approach includes an observation model (red box in figure 1), ecological process model (blue boxes in figure 1), and a set of hierarchical priors (Graham and Weinstein 2018). By distinguishing the observation model from the process model, we can differentiate between interactions which do not occur, from those we do not observe. The process model estimates the intensity of interactions based on ecological factors such as morphological matching, behavior, or phenology (Vázquez et al. 2009). With this process model, we are exploring whether trait matching or plant abundance better predict daily visitation rates between Ecuadorian hummingbirds and plants (Weinstein and Graham 2017). Further, once we are able to predict the probability of interaction once, we can use this information to predict the network structure and explore how it changes throughout the year along an elevation gradient (green box in figure).

Our approach has three benefits: 1) we can differentiate the probability of observing an interaction from the intensity of interaction; 2) our process model incorporates trait-matching as a continuous variable, rather than a binary variable delimitating interaction as either possible or forbidden (Vizentin-Bugoni et al. 2014); 3) the model is structured to be predictive, with relatively few parameters, rather than dependent on post-hoc randomization of the observed interaction matrix. These tools will be a key improvement in parsing apart the importance of traits, local resources and habitat quality in maintaining biological diversity in these assemblages.

If you want to know more about the use of Bayesian N-mixture models in predicting plant-hummingbird interactions, we invite you to read these papers: