The incredible diversity of tropical forests results from both high local diversity (alpha diversity) and remarkable changes in species composition over short distances and along environmental gradients (beta-diversity).  To date, research has focused how and why species composition varies along climate and land use gradients.  Yet, nature is inter-connected, such that diversity patterns of a single trophic level are influenced by the diversity of its interacting partners.

In the face of the alarming pace of recent environmental change on Earth we lack the tools to accurately predict how biotic interactions, that are essential for species persistence and ecosystem services (i.e., pollination), will respond. Developing a predictive science of species interactions requires integrating evolutionary, biogeographic and ecological mechanisms acting at different spatial and temporal scales. We are using a hierarchical cross-scale approach, combining phylogeography, network ecology, statistical modelling and experiments, to disentangle the mechanisms governing species richness and mutualistic interactions in tropical hummingbirds and their food plants (Figure 1).

Macro-evolutionary and biogeographic processes generate distinct regional species pools (gamma diversity). Therefore, we working in three tropical mountainous regions with distinct biogeographic histories and dominant hummingbird groups: the Costa Rican Highlands has high representation of Bees and Mountain Gems that diversified relatively recently; Brilliants and Coquettes diversified in the Ecuadorian Andes; while older clades, including the mangos and hermits are common relatively more prevalent in the Brazilian Atlantic Forest.  In addition, tropical mountains have extraordinary heterogeneity, strong environmental gradients and enormous beta-diversity, permitting space-for-time substitutions which can yield insight into how network structure and diversity will be influenced by on-going climate warming.  By evaluating these distinct regions, we can determine if general patterns and potential processes emerge. 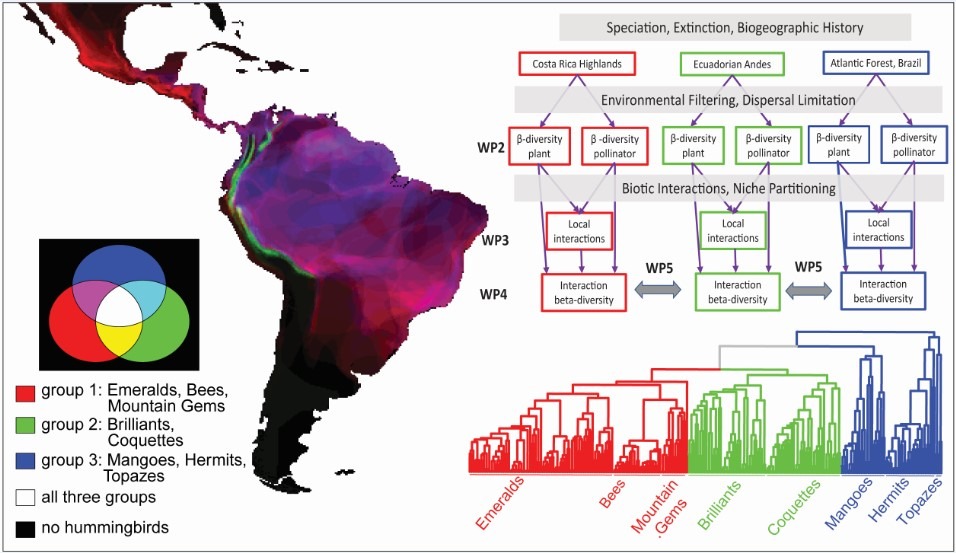 We are collecting an extensive and unique dataset on hummingbird-plant interactions at these three regions (WP1; Figure 2). We focus on hummingbird-plant interactions because they provide a unique opportunity to study the relationship between the partitioning and overlap among resource niches and morphological traits that may affect tropical diversity. Using these data, we are evaluating the influence of environmental filtering on patterns of species and functional β-diversity and niche partitioning across elevation gradients (WP2).  We then focus on determining the factors influencing local interactions (WP3). Combining these two aspects we then evaluate interaction β-diversity which is derived from changes in species β-diversity and local network structure (WP4). Finally, we are generating a predictive model of interactions which will be tested with cross-validation and experiments (WP5).

Addressing this integrative set of objectives will yield a new perspective on one of the most fundamental questions in ecology and evolution; that is, what mechanisms drive the diversity of species and their interactions. 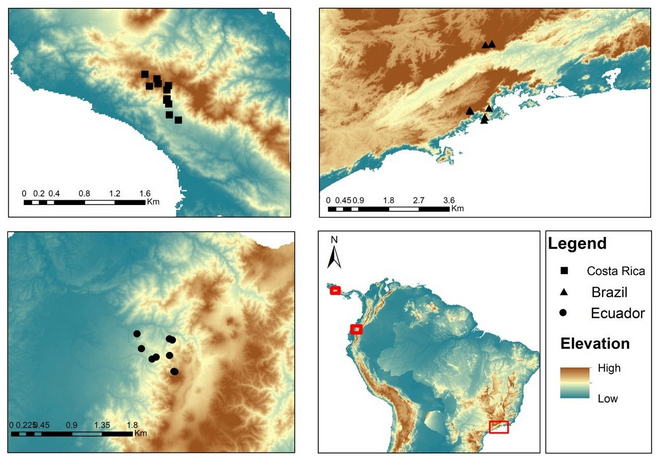 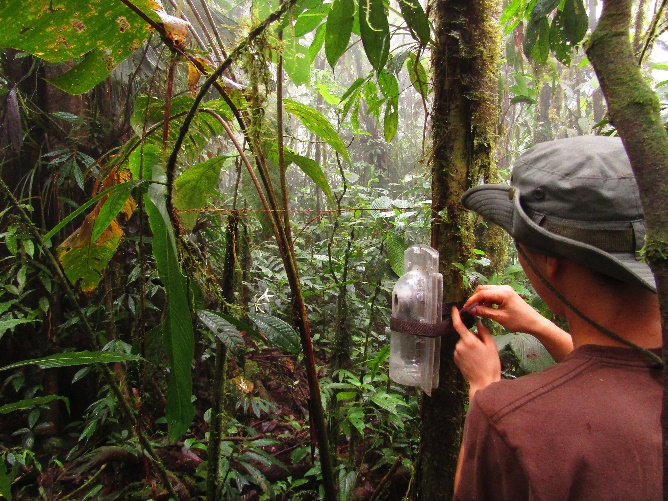 To monitor abundance patterns of flowers, their phenology and hummingbird visitation we use a combination of transects and time-lapse cameras. Transects of 1.5 km are being sampled once per month at each of 9 to 12 sites in each of the three countries for two years.  Five kinds of data are taken on each transect: hummingbird counts, interaction observations, flower resources, flower morphology, and nectar concentration (when possible).  The time-lapse camera strategy was developed Dr. Ben Weinstein (collaborator on the project) working in the same system (Weinstein 2015) and has dramatically increased our ability to collect data. Time-lapse cameras, which take a picture every second, are placed at individual flowers along the above described transects to capture visitation by hummingbird species. Resulting images are efficiently processed using Deep Meerkat, a software that automatically detects pictures with hummingbird visits (http://benweinstein.weebly.com/deepmeerkat.html).

In addition, we are collecting hummingbird functional traits which influence hummingbirds’ role in the community and which plants it interacts with.  For example, bill length can influence which flowers a bird can use, based on the match between the flowers corolla and the birds bill; tarsus length is an indication of perching ability where more territorial birds perch more and have long tarsus; and wing loading which influences flight ability and whether a bird defends a territory or flies between spatially distinct flower clumps, a behavior called trap-lining.

We measured botanical traits with a focus on those traits that might influence visitation by hummingbirds. Three aspects were considered: